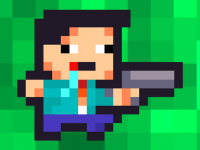 In Noob Super Agent Vs Robots, the superheroes Noob and Robot go head to head. This game will put you in the shoes of a brave Noob, an undercover spy who frequently finds himself in dangerous circumstances. Ammunition should be collected and used to disable the robot guards. Using a USB device, hack the computer and then demolish all of the routers on the level. Don't forget about the dynamite, which you will need to complete the level.

When you start the game, you will see the world map. Arrow keys or touch controls can be used to choose the level. Move with the arrow keys. Jump with the space bar. Shoot with the letter "C." In order to kill the enemies, shoot at them with your gun. Remove the router. Get some dynamite and blow up the exit wall with it.