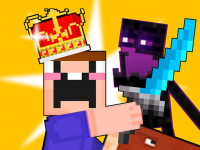 You, as the player, have the opportunity in the video game titled Noob Vs. Pro Castle Defense to assist Noob in the construction of his kingdom and the defense of it against the attack of alien monsters. Noob and his golden crown are the targets of an army's pursuit as they flee from their pursuers. Everything about it is fraught with peril! Are you able to rescue Noob from his predicament?

The red gate is where evil waits to strike, and the dark side of the soul is where it can be found waiting to pounce. Uncover the mysteries that lie hidden in the cover of darkness!

Someone who plans the entirety of the kingdom is called a strategist. Constructing mines will both strengthen the defenses of your buildings and increase their income. Find the most advantageous location on which to construct towers or post archers. Then you must return the vile beasts to their proper place. You are prepared to put your skills to the test and demonstrate that you can survive.

If you found that this chapter was entertaining, you might also like to read Noob vs Pro vs Hacker vs God 1 and then join Noob and his friends in yet another adventure!

To move around, use the W, A, and D buttons.