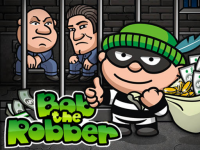 Bob The Robber is a stealth game in which the player must avoid obstacles rather than destroy wiring or smash them. Discover useful evidence by exploring a variety of spaces and structures and then resolving a variety of puzzles. Be sure to earn money and bonus points and avoid getting caught by surveillance cameras, tough guards, or robots.

The game allows players to assume the role of Bob, the stealthy thief. The most effective way to combat real cameras is to avoid them, not to combat them. This adventure stealth game can transport you to opulent estates. Move carefully through each level, preventing security cameras and other foes from detecting your presence. You might have to open doors or do other tasks that have to be done quickly or you could be caught.

Use arrows to play.