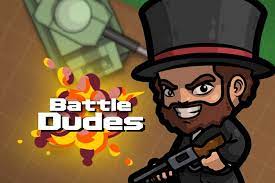 Battledudes is a popular .io shooting game with a multiplayer map. While carrying out a very important mission, you must fight and destroy every enemy you encounter. You have access to over 20 different weapons that can be unlocked by gaining experience points while playing the game. Play across multiple maps, each with their own environments, objects, and weapons. Use vehicles like jeeps and tanks to move more quickly and fight more effectively.

Choose your team, fight as a unit, and support one another to eliminate as many foes as possible. Constantly monitoring your team's and the enemy's statistics is crucial, as is monitoring your own health, weapon switching speed, weapon reload speed, and running speed. Pick up the weapon to fire continuously and with greater force than ever before. Battledudes challenges both your patience and your reflexes. Think and act quickly! To win, you must have the highest score after three rounds and be the last player standing.

To begin the game, enter your username and press the play button. WASP keys are used to move your character, and the trackpad or mouse is used to aim. To reload your weapon, press R, keys 1–4 to switch between weapons, and key E to enter the vehicle. To do the same on a mobile device, tap the on-screen controls.